Let's consider a scenario where the functionality you're trying to extract is not called directly from the outside, rather it is being called from multiple other places inside the monolith.

In this case, you have to modify the existing monolith, assuming can do that and have access to the code. To minimize the disruptions to existing developers and make changes incrementally you can use the branch by abstraction pattern.

There are five steps to implementing the branch by abstraction pattern:

Let's look at each step in more detail.

As an example, let's consider we are trying to extract the functionality that sends a notification, that looks like this:

As part of the first step, you will create an interface that describes the functionality, something like this:

2. Use the abstraction with the existing implementation 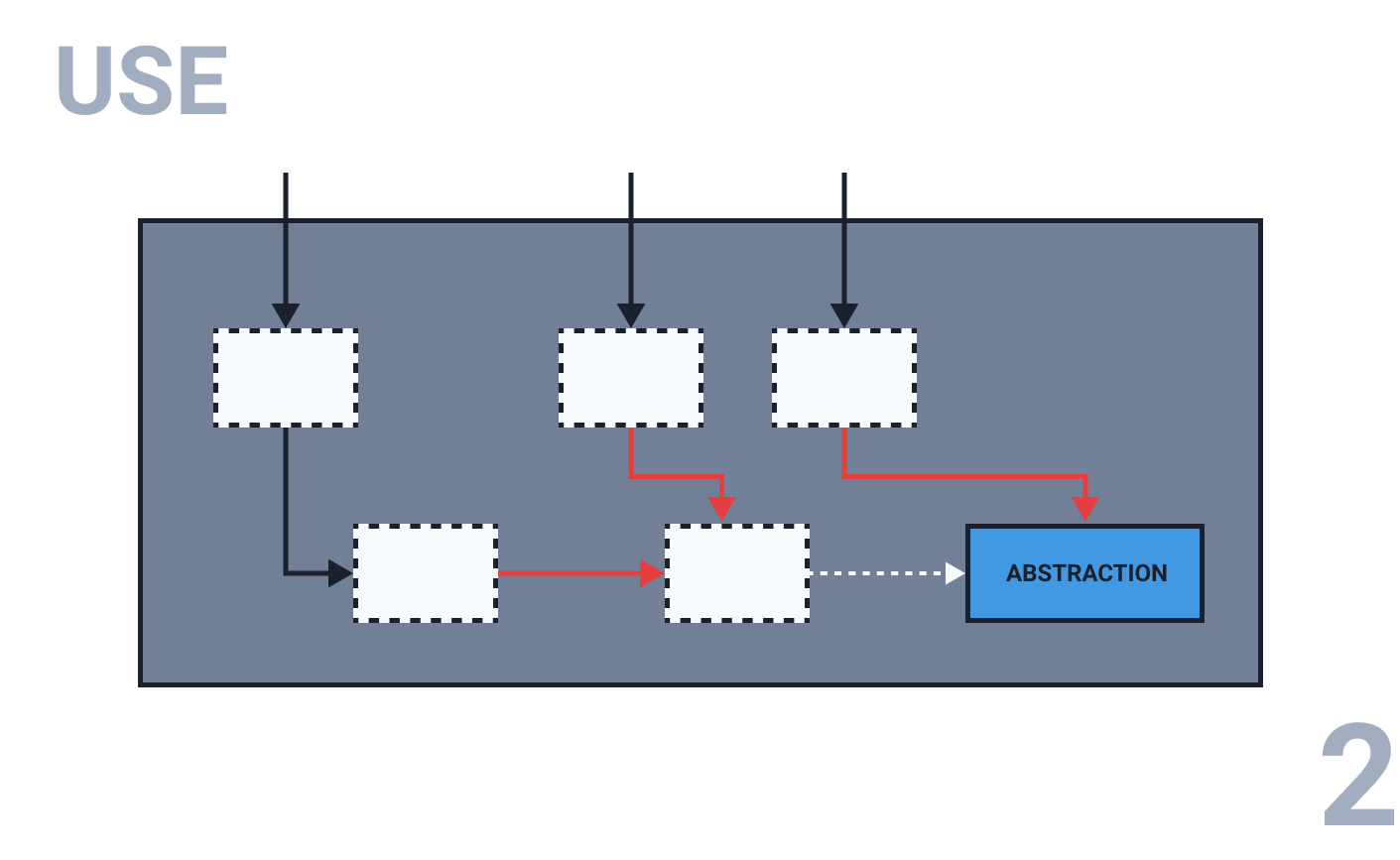 Once you put the abstraction in place you can refactor existing clients/callers to use the new abstraction point, instead of directly calling the implementation. The nice thing here is that all these changes can be done incrementally. At this point, you haven't made any functional changes per-se, you only re-routed the calls through the abstraction.

Practically speaking at this point you will have to create an implementation for the Notifications interface you created in the previous step. Here's an example of how you'd do that: 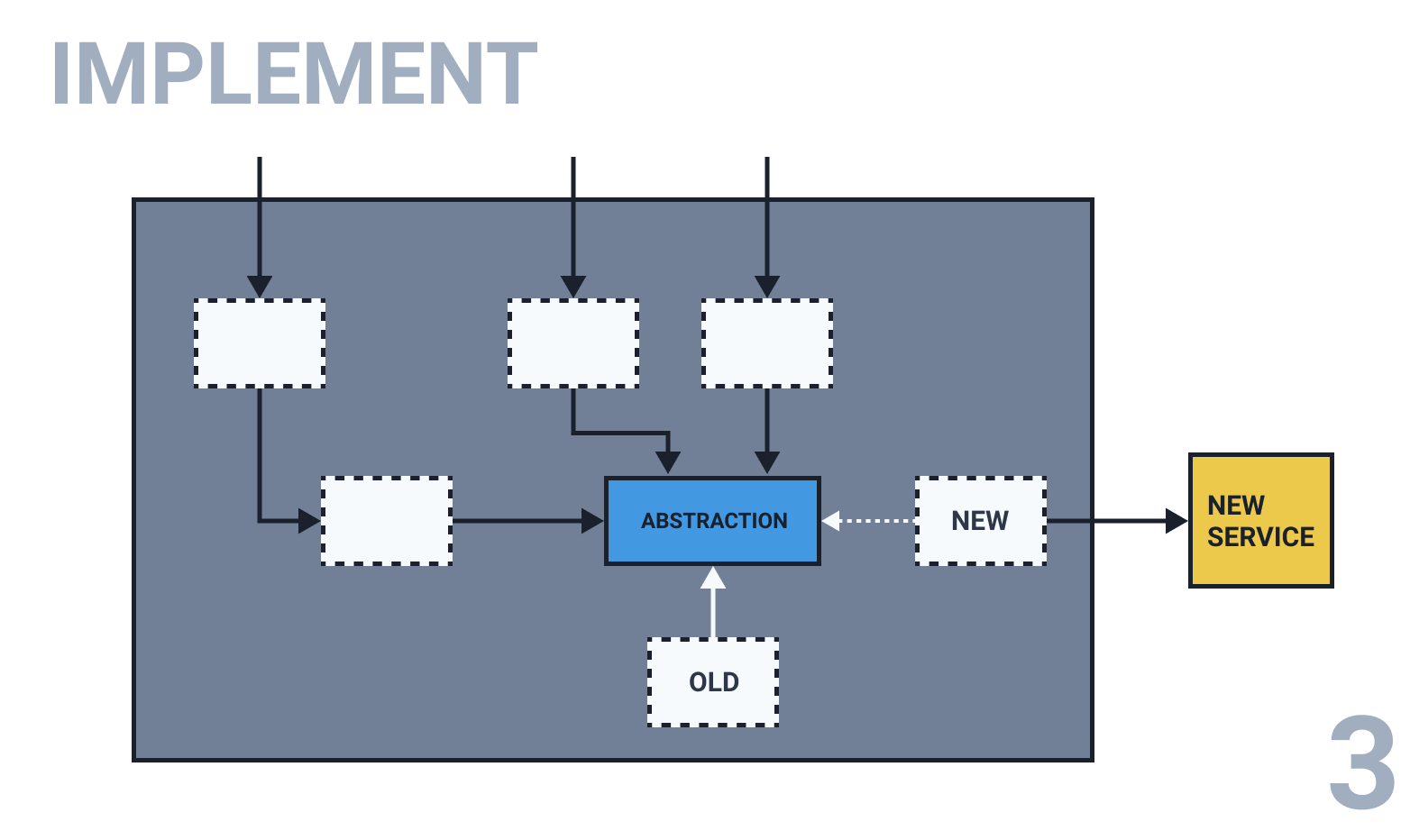 The existing functionality is now being called behind the abstraction and you can independently work on implementing the new service that will have the same functionality. Similarly, as you would do it with the strangler pattern, you can deploy the new service to production, but don't release it yet (no traffic is being sent to it). This allows you to test the new service and ensure it works as expected.

You can also spend time in this step to create the new implementation of the Notifications abstraction, that will call this new service. For example, something like this:

Similarly, you can start updating the newNotificationSystem function and put the new implementation under a feature flag.

Feature flags, also known as toggles or switches, allow you to switch certain functionality on or off through the use of configuration settings/environment variables, without redeploying the code.

You would continue to monitor the new service to make sure everything is working as expected. If you discover any issues you can revert to the previous implementation by simply removing that environment variable. The nice thing about this pattern is that you aren't locking yourself out of anything and at each step there's an 'escape hatch' you can take in case something goes wrong.

The final step is to clean up. Since the old implementation is not being used anymore, you can completely remove it from the monolith. Don't forget to remove any feature flags as well. You could also remove the abstraction, but I think leaving it in place doesn't hurt anything.

The branch by abstraction pattern can be extremely valuable when you're trying to extract functionality that's deep inside the monolith and you can't intercept the calls to it at the edge of the monolith. The pattern allows for incremental changes that are reversible in case anything goes wrong.

Peter Jausovec is a software and content engineer at Tetrate.io. He has more than a decade of experience in the field of software development and tech, in various roles such as QA (test), software engineering and leading tech teams. He's been working in the cloud-native space for the past couple of years, and delivering talks and workshops around the world. He authored and co-authored a couple of books, latest being Cloud Native: Using Containers, Functions, and Data to Build Next-Generation Applications.

SSL certificates are a must these days. They helps protect the data being sent between the server and the client by encrypting it, which gives your website more credibility. In this blog post I will explore a couple of different ways you can obtain SSL certificates and configure the Istio Gateway to use them.

Expose a Kubernetes service on your own custom domain

You have finally deployed your app to Kubernetes and you bought a cool domain name — ever wondered how to point your cool domain like www.mydomain.com, but cooler, to an application running inside Kubernetes? Well, read on and I'll try to explain how to do just that!

GetIstio CLI was released this week. GetIstio features aCLI that offers an easier way to install and upgrade Istio, a free Istio Fundamentals training, and a community, with the first meeting coming up on February 18th.

Istio allows you to enable or disable different components, as well as tweak the configuration for them. However, what do you do if you want to deploy another ingress gateway? In this article, I go through a couple of exercises and try to deploy a second ingress gateway.

In this first lab in the series of Kubernetes labs, we'll learn how to create a Kubernetes cluster in Google Cloud

How to Deploy Traefik Proxy Using Flux and GitOps Principles

GitOps makes configuration management seamless by creating a single source of truth for configuration changes so that changes can be transparent, validated, and low-risk. This article and this GitHub repository will show you how Traefik Proxy and Flux can work together to help you implement GitOps principles. But before we jump in, what are these tools, and how do they help?